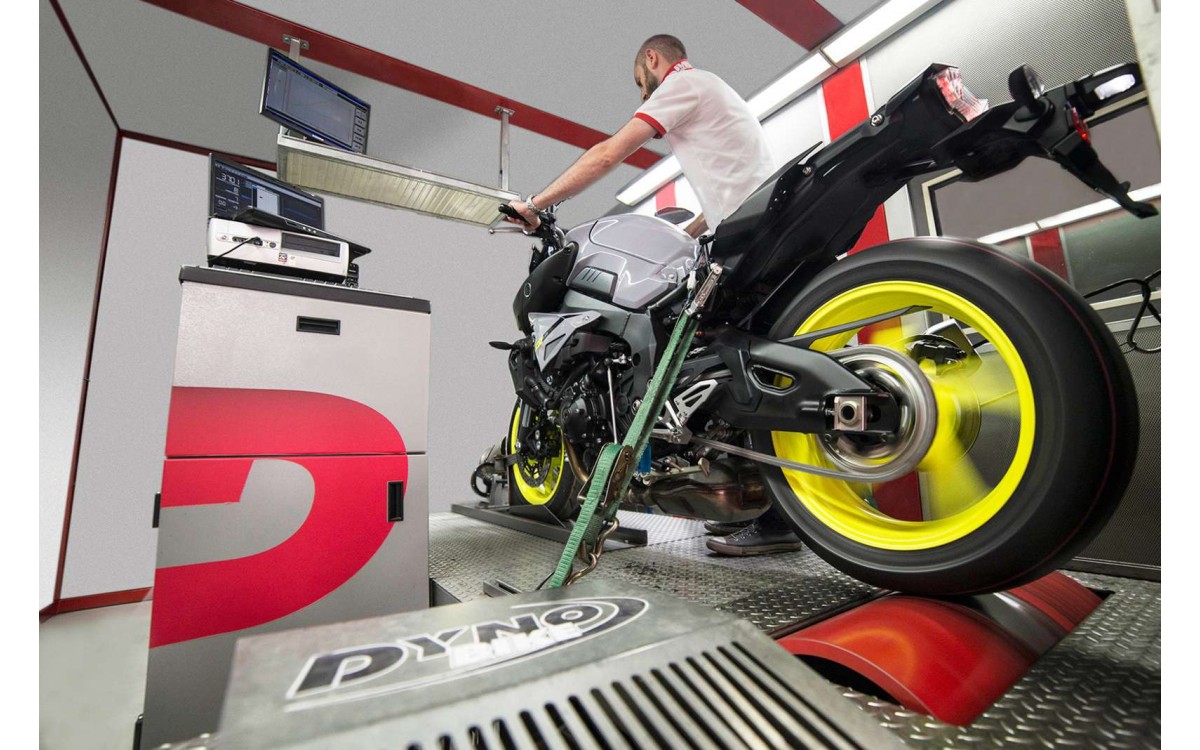 We have yet to find a motorcycle enthusiast who does not talk about horsepower. Well, horsepower is talked about at virtually every new motorcycle launch, too.

But how do we measure the engine’s power?

Engine vs. chassis dynos
With “engine” dynos the engine is attached directly to the dynamometer, which requires that it be out of the motorcycle. It’s thus used by manufacturers in their factory’s engine room. 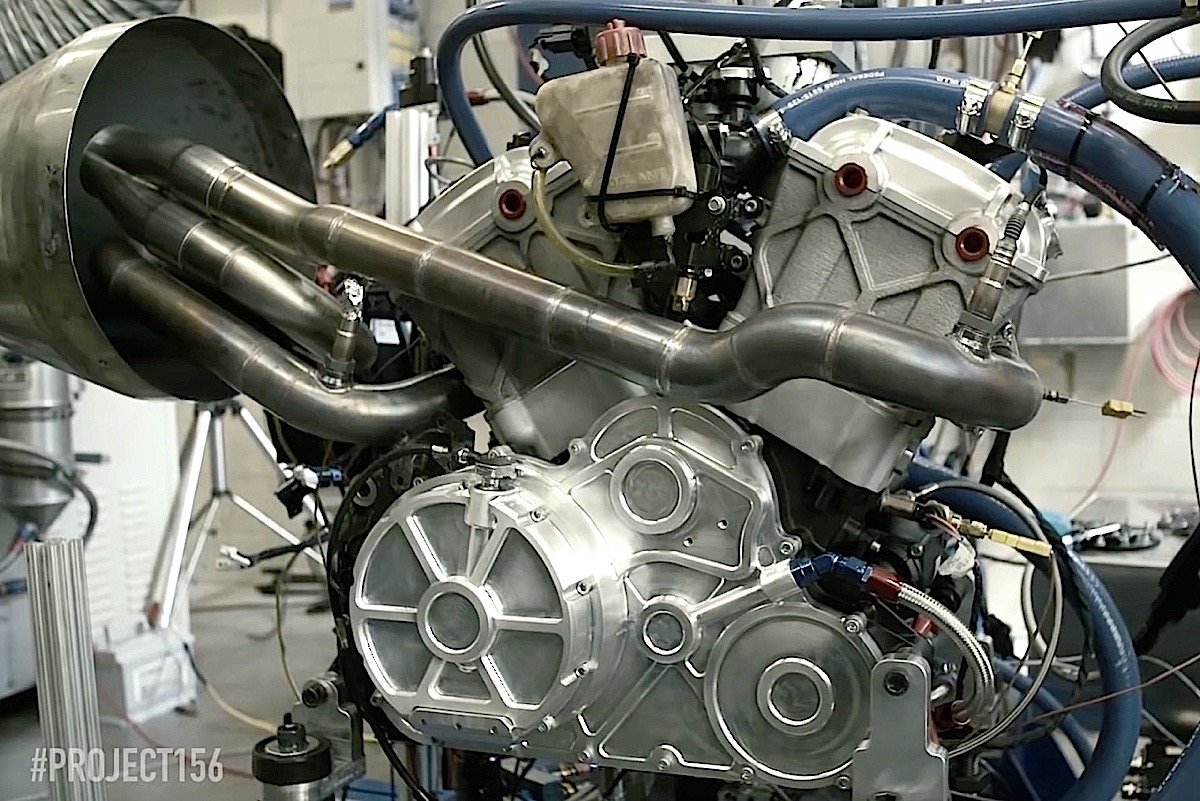 “Chassis” dynos, on the other hand, are a lot more convenient because these allow the complete motorcycle to be cinched down with the rear wheel against a roller, which drives the dyno's measuring system. Hence, this type is what we find in the market. 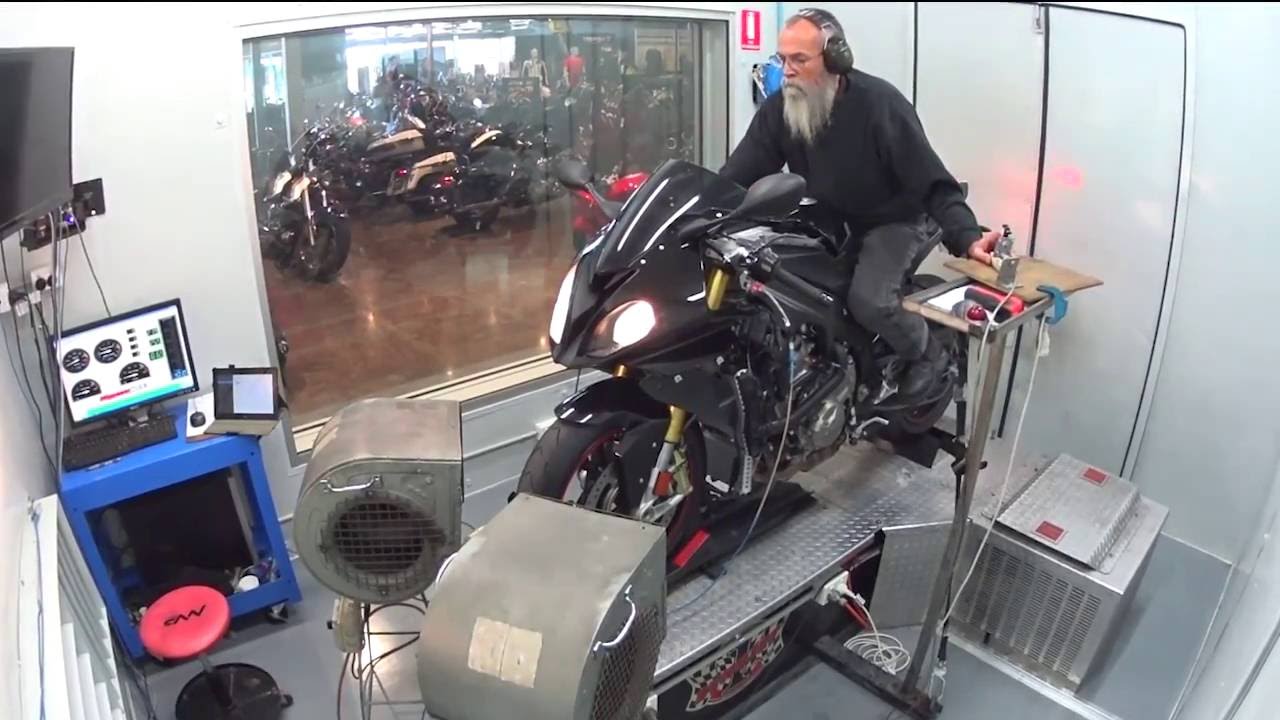 How torque and power are obtained
There are two basic ways of absorbing the power that engines produce in dynamometers: the most common are “brake” and “inertial” methods.

With a brake system, typically an electro-magnetic resistance (eddy current), or a water wheel spun against the resistance of water cause drag that is used to put a load on the engine. The engine is paused at certain rpm steps (such as every 250 rpm) and readings are taken, then the engine is sped up to the next “step” and so on. 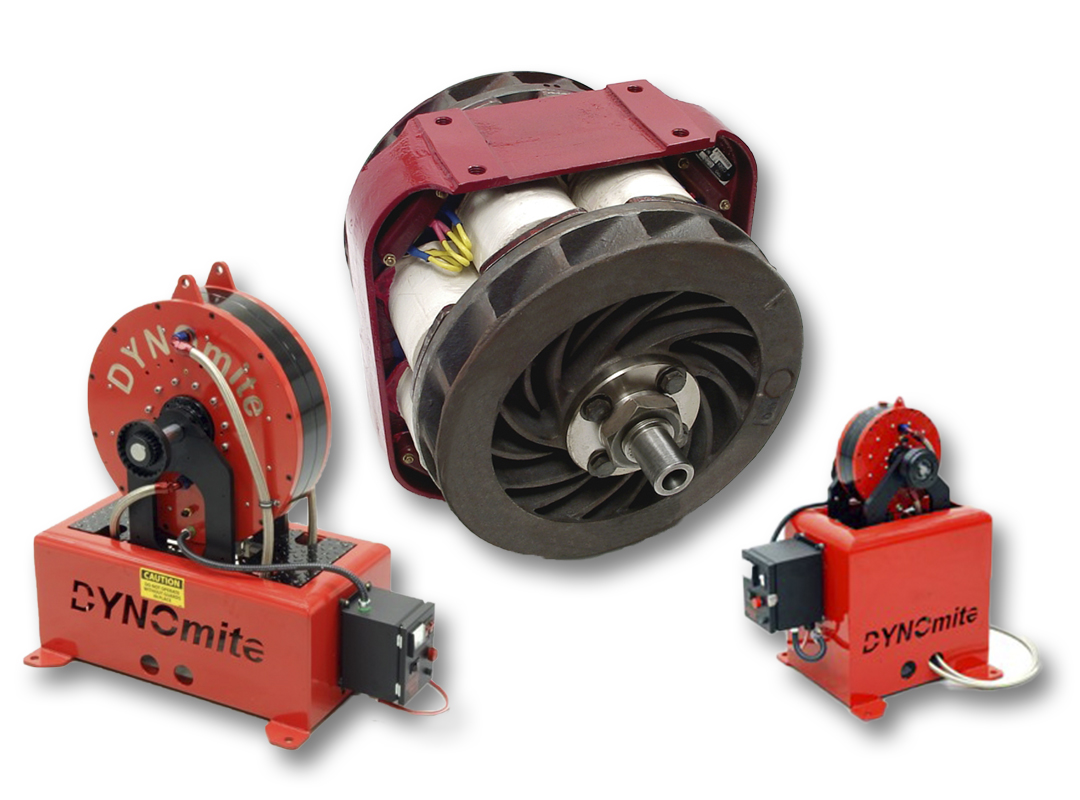 With inertial systems, a heavy drum or roller assembly contacts the drive wheel and is accelerated by the motorcycle's engine. The rate it accelerates can be used to calculate the force and power being applied, as well as give results in torque and HP. Brake-type dynos can give a steady load and hold an engine at a specific rpm for extended testing, while inertial dynos spool up quickly and can't maintain a steady speed and load. 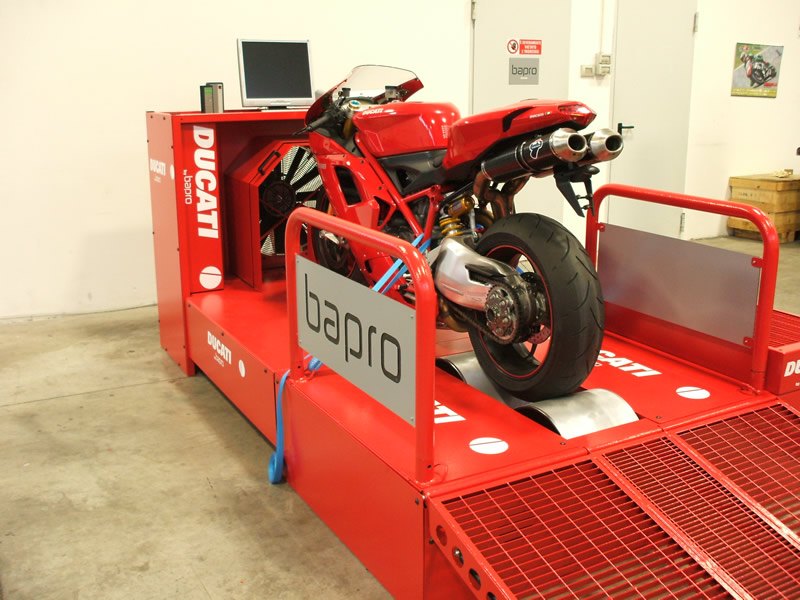 Torque vs. horsepower
In order to understand horsepower, you need to understand torque. Engine “torque” is the twisting force at the crankshaft, which comes from explosions in the combustion chamber(s) pushing the piston(s) down, which push the connecting rod(s) and rotate the engine's crankshaft. This rotating motion is transferred through a clutch, transmission, and finally by chain, belt or gears to the drive wheel before moving the motorcycle. There are losses along the way that we will address.

Horsepower (HP) is a unit of measurement for “work” over a period of time. Standard mechanical horsepower is defined as 550 lb-ft of torque per second and/or 33,000 lb-ft of torque per minute. Horsepower is a calculated figure (not directly measured), which is derived by multiplying the engine's torque (in pound-feet) by engine speed (revolutions per minute or RPM) and dividing this figure by 5252. This is the formula used by the Society of Automotive Engineers (SAE). With this formula, at 5252 rpm, both the torque and horsepower have equal values, which is why torque and horsepower graph lines intersect at 5252 rpm. 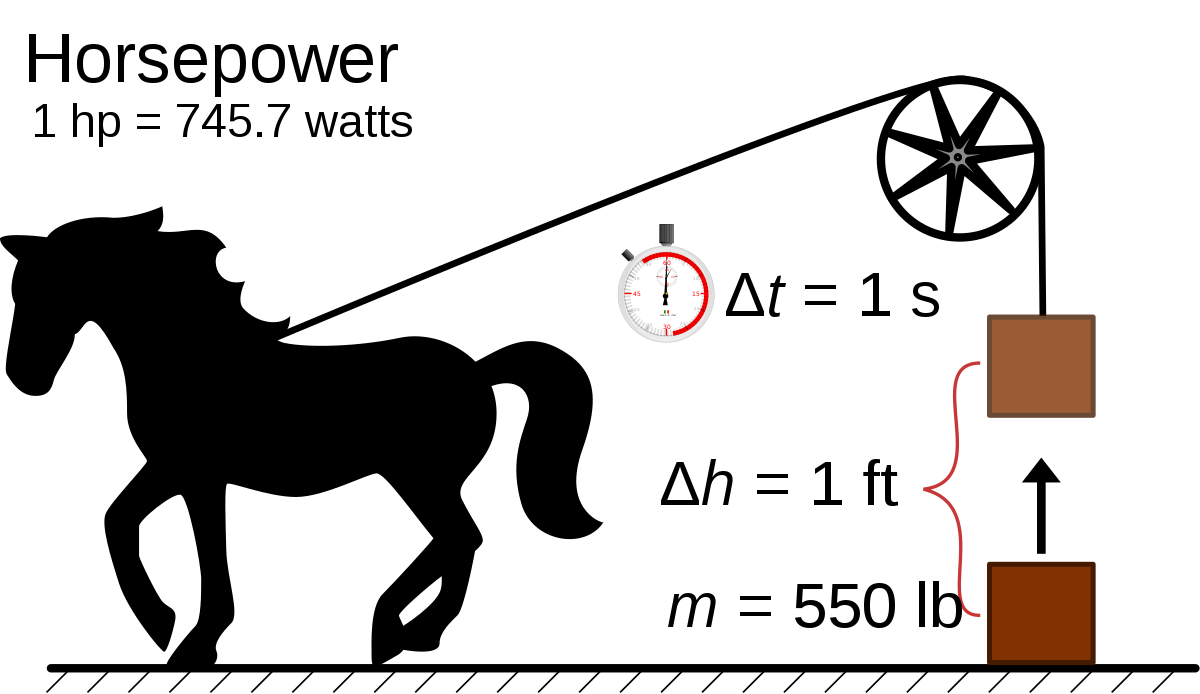 Power output varies greatly with changes in air temperature, pressure and humidity. As a rule of thumb, horsepower drops off about 3 percent for each 300 metre (1,000 feet) increase in elevation. To adjust for readings taken in differing atmospheric conditions, dynamometer horsepower measurements are often “corrected,” typically by using SAE atmospheric correction factors.

The units
You may see the term “brake horsepower” or BHP, which generally means that the horsepower was measured on a type of dynamometer which applies a brake or other device that resists the force that the engine is producing. Power is also measured in other units besides horsepower. Most European Union countries now use the kiloW (kW) for measurement of power. With the implementation of the EU Directive 80/181/EEC on January 1, 2010, the use of HP in the EU is only permitted as a supplementary unit. One mechanical horsepower is considered to be equivalent to 745.7 watts or 0.7457 kW.

Some other terms you may see are true horsepower (THP), effective horsepower (EHP) and wheel horsepower (WHP). This is the power that turns into forward motion as measured on a chassis dynamometer at the drive wheel(s). The numbers you see quoted in motorcycle manufacturer's specs usually are peak “crankshaft” horsepower, and such figures can be misleading. Peak horsepower is great for bragging rights but doesn't drive the bike.

Here is an important note. Power available at the motorcycle's drive wheel is roughly around 10 to 15 percent less than the engine's crankshaft output, due to transmission and final drive losses. Therefore, it's important when comparing engines to be sure if a rating is crankshaft horsepower or rear-wheel horsepower. Generally, manufacturers provide the former on a bike’s spec sheet.

Measuring on different dynos
Variations between dynos is also very significant. The two most common motorcycle drive-wheel dynos are SuperFlow and DynoJet. According to Steve Cole, owner of TTS Power Systems, his testing and comparisons found that Dynojet HP readings are typically around 16 percent higher than SuperFlow readings.

Unlike racing engines, street riders seldom operate their engines at full throttle for very long. An engine that produces a wide, nearly flat torque curve will provide more useful and pleasing power on the street than an engine that has a steep jagged curve on the graph. It also means that you won’t have to shift as much. Peaky power output makes it more difficult to ride, with constant shifting to stay in the narrow power band. Bikes with sharp power spikes are prone to wheel spin on corner exit and sudden wheelies under hard acceleration—both of which can lead to slower lap times, crashes, or tickets on the street. As you can see, there's a lot more to dynos and power ratings than meets the eye!