History of the Radial Motorcycle Tire

The radial tyre is such a common place now that almost no one gives a second thought to it. 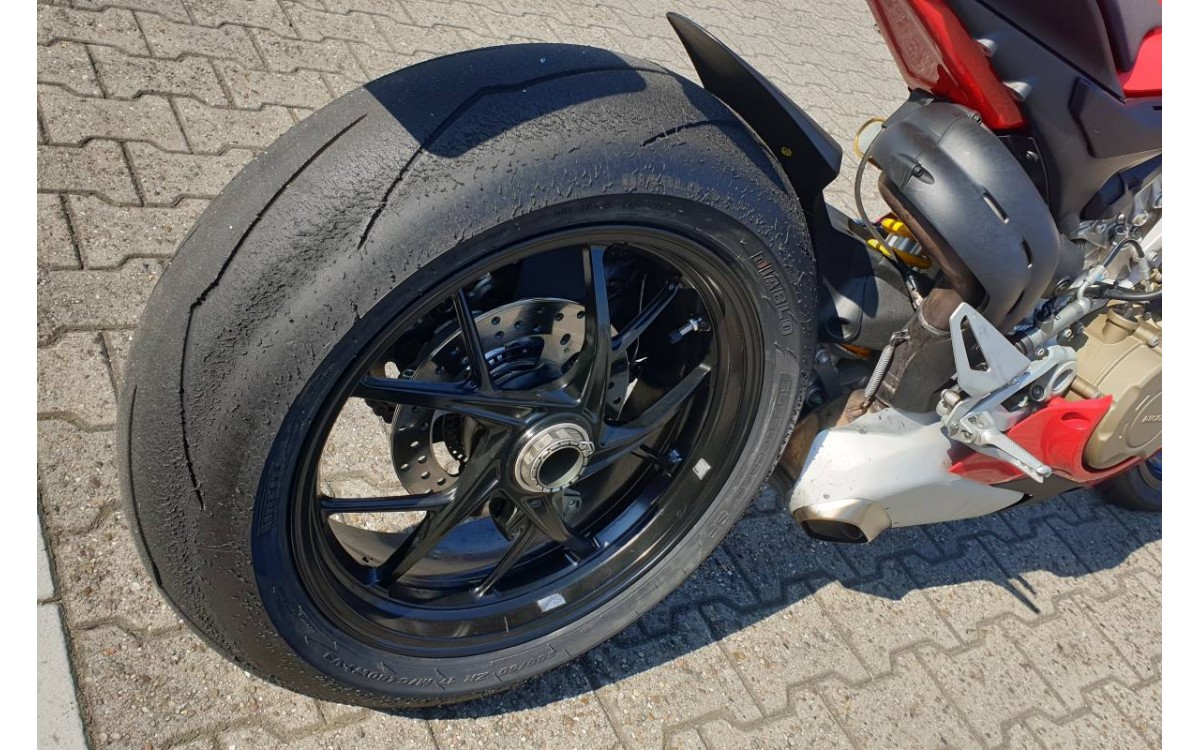 History of the Radial Motorcycle Tire

The radial tyre is such a common place now that almost no one gives a second thought to it.

But jump on almost any big bike above 250ccand ride away… it would most probably be rolling on radial tyres. Even riders who moved up from mopeds do not question what they are.

The radial tyre, especially for motorcycles, is something fairly recent, compared to when the pneumatic tyre (tyre filled with air) was invented.

Contrary to popular belief, the patent for the pneumatic was lodged by Scottish inventor, Robert William Thompson in 1847, instead of John Dunlop. His invention, however, did not make it to production.

But it was John Dunlop, a veterinarian, who created the first working pneumatic tyre in 1888. He invented it for his 10-year-old son who complained of headaches after riding their bicycle fitted with wooden wheels.

Tyres were bias-ply until the advent of the radial tyre. Bias-ply (also known as cross-ply) describes the plies that form the body the tyre being laid diagonally from bead to bead. Subsequent plies are laid on top at opposing angles, forming a criss-cross pattern (hence the name cross-ply). This allows the tyre to flex easily hence greater comfort. However, this quality was also the main disadvantage of this type of tyre, as it causes increased rolling resistance (fights to get going), together with less traction and control at high speeds (the tyre deforms). Bias-ply tyres generally could not withstand the high centrifugal forces at high speeds, leading to blowouts.

A radial tyre utilizes ply cords that extend from bead to bead and parallel to each other, usually around 90-degrees to the tyre’s travel, instead of diagonally across like in bias-ply tyres. The plies are held in place by stabilizer belts that run just beneath the tread. The advantages of radial tyres are numerous including longer tread life, better steering control, improved fuel economy due to less rolling resistance, and better grip.

The history of the motorcycle radial tyre

It was the French tyre maker Michelin who patented the radial tyre in 1946. They finally developed the first practical radial tyre (starting with cars) in 1951 and fitted to the Lancia Aurelia. It took more than 30 years later before radial tyres made their debut on road bikes.

Who actually created the first production radial motorcycle tyres is still up for debate.

Pirelli claims it was first in 1983, when they introduced radial tires for the Honda VF1000 R. However, that tyre was only available for the said motorcycle. Michelin, on the other hand, was the first to offer (albeit a small range) of radial tires for non-brand specific motorcycles in 1987 called the A59X and M59X, front and rear, respectively. 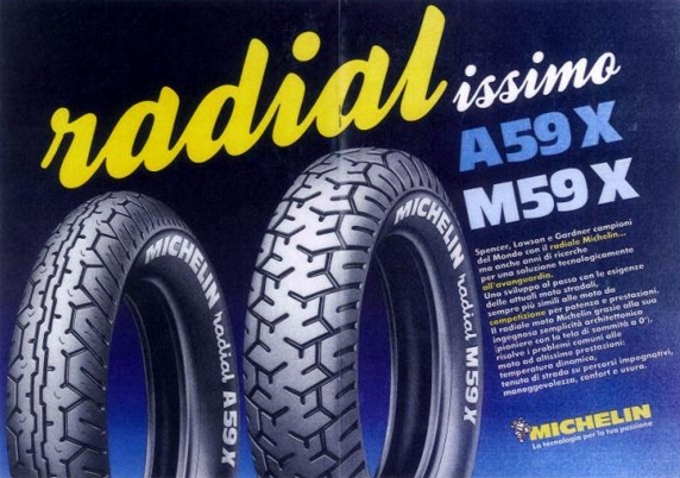 But whatever the stakes, it was Michelin who did the most research into radial tyres from the very start. The actual concept of a radial tire does though belong to Michelin, as its engineers came up with the idea for automotive tires in the 1930s.

Michelin claims its program for radial motorcycle tires began in 1981. The majority of the development work was undertaken at the racetrack with three-time World Champion Freddie Spencer running a single radial tire on the rear only of his Honda 500cc HRC for a season.

The next stage in radial tire development saw Michelin, in 1990, introduce silica into the rubber tire compound to resolve the early problems of finding the right balance between grip and rolling resistance, without adversely affecting the tyre’s grip. By adding silica, Michelin was also able to improve wet weather performance and its grip.It took another nine years for the Michelin Pilot Sport to become the first production bike road tire to have this feature.

and a further six years for the Michelin Power Race, the world’s first motorcycle racing tire approved for road use to become widely available.

Michelin also took another step to develop the first dual compound tyre, introducing a harder wearing compound at the centre combined with a softer and gripper compound on the shoulders in 1994. It was first used exclusively for racing and the development of the tyre finally bore fruit as the Michelin Power Race in 2005. The tyre was the first ever racing tyre that could be homologated for road use.

Tyre technology and development have gone through so many milestones especially in the last 5 decades. The rise of ever more powerful, faster, and heavier motorcycles today can be directly traced to the advancement in radial tyres.