Do Not Neglect the Brake Fluid! 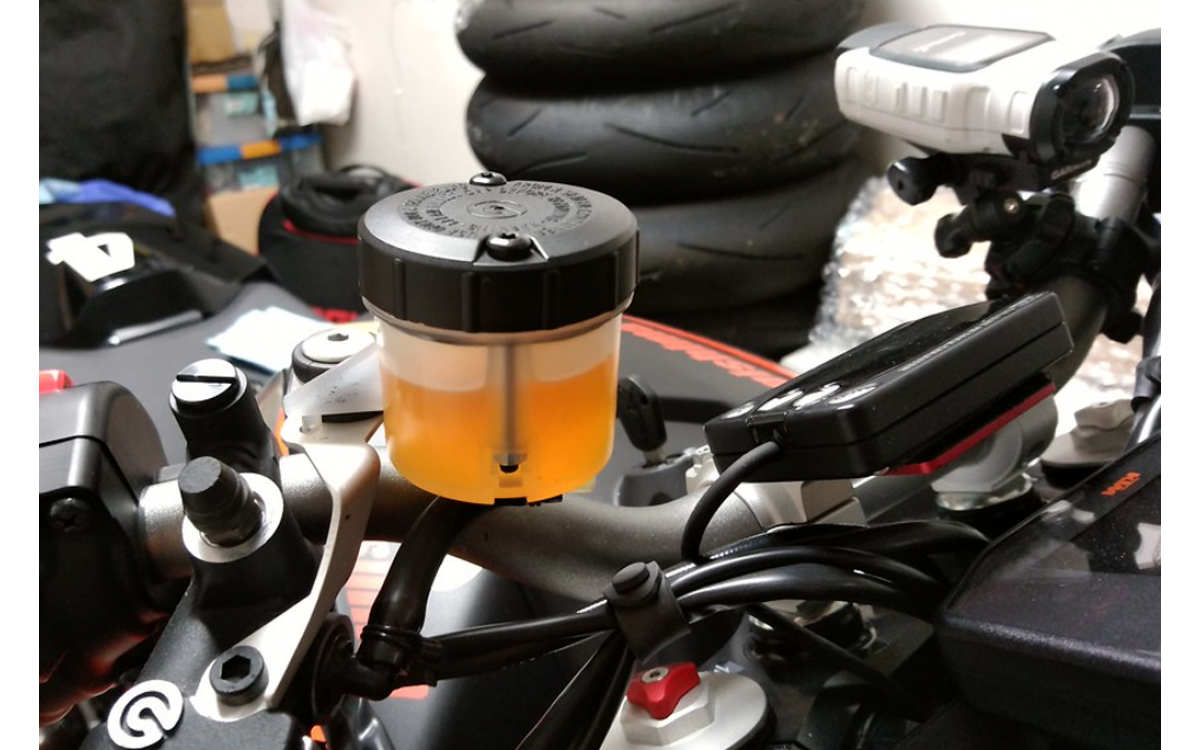 Do Not Neglect the Brake Fluid!

Bikers always crave the best brakes such as Brembo Monobloc or Stylemacalipers, or advanced braking systems such as ABS and Cornering ABS.

Then, we completely neglect the brake fluid.

Ironic, but it happens because modern disc brake systems work so well that required little maintenance. So, all we do is change out the worn pads. Until we lose the brakes altogether.

What is brake fluid?
It is the lifeblood of the hydraulic brake system, pretty much like the blood in our bodies. It is through the fluid’s resistance to compression that we have braking action.

The majority ofbrake fluids are glycol-ether based, but there are silicone-based ones, too. The glycol-ether typeis hydroscopic (attracts moisture), while the silicone type is hydrophobic (rejects moisture). Moisture usually enters the system through unnoticed leaks in the system or microscopic holes in old rubber brake hoses.

Brake fluid is classified by its dry and wet boiling points.

The standard is specified by the American Department of Transport (DOT) under the Federal Motor Vehicle Safety Standards (FMVSS) No. 116.

Refer to the table below.

DOT 3 is no longer used in new vehicles, but we have encountered it in some workshops. Do not use it if your motorcycle’s manufacturer specified DOT 4 (embossed on the reservoir cap). Using it in your DOT 4 brake system can cause the fluid to boil prematurely, causing loss of feel or braking action.

DOT 4 has higher boiling points compared to DOT 3. Hence, a vehicle specified for DOT 3 can use DOT 4 brake fluid.

As mentioned earlier, DOT 5 brake fluid is silicone-based, and is thus incompatible with DOT 3, DOT 4, and DOT 5.1 fluids. DOT 5 was introduced as because it does not attract moisture and does not eat through paint. It was hoped that these attributes appeal to cruiser and custom bike owners.

However, DOT 5 brake fluid is not compatible with ABS systems. The pulsing action of the ABS system during activation will cause the fluid to aerate (bubble and ingest air).

DOT 5.1 was introduced after DOT 5 fluids failed to find wide acceptance. DOT 5.1 fluid is non-silicone andthe FMVSS No. 116 standard defines it as having less than 70% silicone. As such, DOT 5.1 fluid can be mixed with glycol-ether based brake fluids, while retaining some of the DOT 5 attributes.

Why do we need to replace it?

As you can see from the table above, the brake fluid’s boiling drops drastically with just 3.7% moisture in it. A fluid that has been used for a long time, together with old brake hoses, will accumulate higher levels of moisture than just 3.7%.

While the brake fluid boils at higher temperatures, water boils at 100o C. Boiling water in the system will cause air pockets which can be compressed. In mild cases, the brake lever will feel spongy (loss of feel). But in extreme cases, the bike does not slow down or stop despite the lever being squeezed back all the way to the handlebar!

Old brake fluid will also give coagulated crust called sludge. Thissludge can cause loss of fluid flow or blockage altogether. This sludge could also damage an ABS pump. You can imagine what happens when these orifices are blocked.

Brake fluid of any type must be replaced every 2 years, regardless of condition. The fluid may still retain its amber colour and appear clear but there is no telling how much moisture it has absorbed.

Also, rubber brake hoses generally need to be replaced every 4 years. Conversely, it may take a longer period of time before needing to replace steel braided hoses. Please refer to your owner’s manual.